Each of us said goodbye to our Kiel hosts and went in various directions – the end of the formal Journey and start of independent touring or just getting back home.

At the Farewell dinner last night, Jens (Kiel FF President) said it, and Inga (Kiel FF ED) said it, and Marty (our ED) said it. But I’ll say it again – the week went by so quickly, we’ve made all these wonderful new friends and now it is already time to go.

PJ and I took the train to Hamburg, on our way to search for the villages where my Great-Great-Great grandparents lived.  We had no problems with our short train trip, but a few did . . .

We left for the Hamburg airport at 9:15 an hour early and it turned out to great planning because we spent it parked on the autobahn because of this serious accident.  We made the airport with plenty of time to spare.

Inauspicious beginning.  Train to Hamburg 10 min. late.  Elevator not working to platform 5, so carried luggage down the steps.  Train moved to platform 8.  Only door open was car 24, my seat in car 21.  Whistle blew as I was getting on train.  Took my luggage through 4 cars to my seat - sweaty and shaky.  Then came an announcement the train will be 45-60 min late getting into Berlin due to an accident train rerouted.  But the train’s WIFI works.

I missed my train to Berlin from Hamburg due to the change to track 8, which I didn’t catch. (So also lost my seat assignment). Caught a later train which will also be delayed one hour arriving in Berlin. At least now I know why...

That's all I've heard about so far - I hope all of our other Ambassadors are having safe travels and I'm look forward to exchanging stories with everyone when we get back.

Farewell Party – Goodbye to our new friends in Kiel, Germany

The day started with a tour of the magnificent Kiel Opera House.  That had seen rebuilt in 1956 after WWII replacing the original one built in 1906.  Germany has more opera houses than the rest of the world combined because in olden times, every Baron wanted his own.


The stage was 100 feet front to back and the orchestra pit was about 15 feet deep.  I sure wouldn’t want to make a misstep and fall in.

The set building area reminded me of my Dutch grandfather’s cabinet shop.  The quality of workmanship was amazing.


The costume storage “closet” had 40,000 for men and 20,000 for women and one indispensable man that had them cataloged in his brain.


The young dancers were practicing moves that defied gravity.


After a tour of a beautiful nearby shopping mall we were treated to a special lunch at Kiel University with about 300 students.  Ulrich is a very well respected professor of economics there and was greeted by a number of his colleagues.


Farewell Party – Goodbye to our new friends in Kiel, Germany


The evening was full of goodbyes and thanks.  Once again showing the reason for Friendship Force. 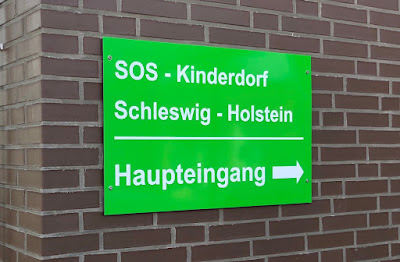 
Today was Ute’s day to drive us because Ulrich, who is a Professor Emeritus in economics at Kiel university, was going to be at his office for a few hours.  It is a running joke between them whether we are more comfortable in his Mercedes or her VW Golf.  Getting to Lutjenburg took a bit longer than a half an hour by car.  We had lots of interesting conversation along the way.  We are learning so much about their lives and family.


The SOS Kinderdorf that we visited was the idea of an Austrian man at the end of the 2nd World War and made its way to Lütjenburg by 1970.  The village hosts 45 children in family groups, each one with a full time “mother”.  The program gets both public and private support and the “home” that we visited was modern and spacious.  Our club was very happy to contribute to its ongoing success.

Next we visited St Michael’s church.  It had an impressive altar carvings and the meaning of all the individual sections was explained to us.  The carvings and coat-of arms on the loge boxes for those who had contributed heavily to the church were also interesting.  After a quick sandwich or ice cream and we were ready for our next adventure.


We drove to the manor complex at Gut Panker near the Baltic Sea.  It has been owned by the Landgraves of Hessen since the 18th century.  We learned all about the Trakehner, a bred of horses that can be seen in the meadows and paddocks there.  A fun fact was that this year’s seven foals will be the last to be branded, from now on they will have a chip implanted in their necks.  The estate now houses many shops and galleries and we had time to browse or shop.


A historical note - remember in school when you studied the Revolutionary War, and there was something about the Hessian mercenaries?  Panker is where they came from. Hessians were German soldiers who served in aid of the British Army during the American Revolutionary War.  Around 30,000 fought for the British, forming a quarter of the troops sent to British America. The use of German troops to suppress a rebellion in the British colonies angered the American patriots, and one of the grievances against King George III in the Declaration of Independence was "transporting large armies of foreign mercenaries". And actually they were auxiliaries, not mercenaries. Auxiliaries served their prince and were sent to the aid of another prince, while mercenaries served a foreign prince as individuals.  [from https://en.wikipedia.org/wiki/Hessian_(soldier) ]


Then it was coffee time at Ole Liese with an assortment of local treats.


Our last stop of the afternoon was at an ostrich farm where Ute bought ostrich fillet for our dinner.  We had never eaten it before and had heard that it can be tough but the way Ute prepared it was delicious and very tender. 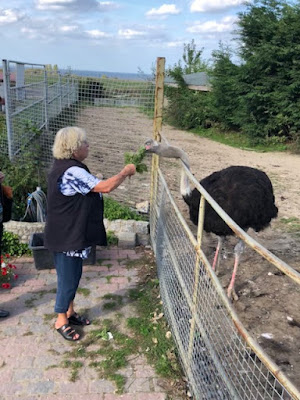 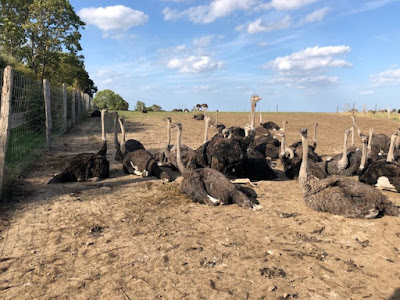 After dinner we had a lovely walk in the nature area directly behind Ute and Ulrich’s home.  Another wonderful day with lovely hosts.


Our beautiful fall day began with a tour of Fenna Graff’s private garden.  She has enjoyed creating her piece of paradise for over twenty years.  She took us along many walkways and paths with lovely surprises around each corner.


There is a famous old oak tree in the Dodau Forest near Eutin called the (Bräutigamseiche). People write letters and put them inside the tree for others to read. Our host coordinator-Inga has a cousin that wrote a letter almost 50 years ago. That letter was found by a man who became her husband and they have been married for 48 years.  Could this be the original Match.com?


Lunch was an elegant affair as we ate inside of Eutin Castle.  The castle was a former residence of the prince-bishops of Lubeck and later the grand dukes of Oldenburg.  It is separated from the city by a moat and the castle plaza.
After a delicious lunch we had a tour of the castle museum and then a private organ concert at a local church.


We were honored with a private organ concert in the church.


Honestly, we have been treated like royalty today!  Thanks to Inga and the Kiel club for sharing some local lore and great historic sites with us.


In Friendship and Peace


Today we visited the Kieler Rathaus (Kiel City Hall) with a special greeting from a city official since the mayor was unavailable.   We heard some facts about Kiel and Marty presented her with a gift from California, but the most fun was riding the continuous elevator (nicknamed the ‘Pater Noster’ after the way the elevator cars move up and down like a priest’s hands) and seeing the city from the tower.

We then visited Geomar where learned all about oceanic research all over the world being led from this foundation in Kiel.  Most impressive were the robotic exploration devices and in particular the failed one which displayed the power of pressure in deep water.

After a schnitzel and pommes lunch, we toured the Botanical Gardens (part of the Christian Albrechts University of Kiel).  It had many variety of plants, including many we have in California.


They even had a number of Chile pepper plants in the medicinal garden. 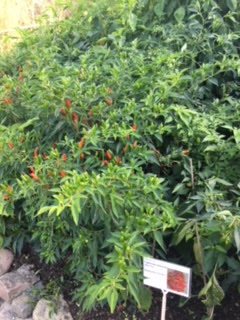 And to top the day, it was perfect weather.

The Power of Friendship - The Promise of Peace By: Rozlynn Worrall May 30, 2017

Opening Day of School Celebration, Moldova, September 2016 The Power of Friendship - The Promise of Peace By:  Rozlynn Worrall May ... 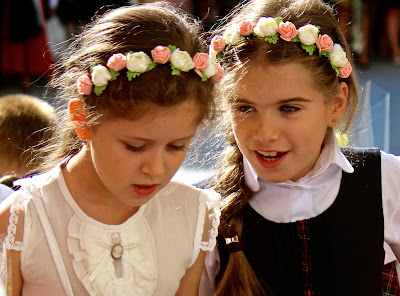